Lucky wedding traditions around the world 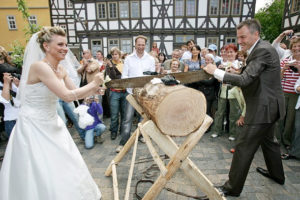 Lucky wedding traditions around the world

If there’s one thing Hollywood has taught us, smashing plates at a Greek wedding is tradition. But what about the rest of the world?

The team at 888Poker has pulled together a list of 21 lucky traditions which include broom jumping, bell breaking, and running away. Wedding entertainment can often make the big day truly special, so it’s worth giving a lot of thought to if you’re planning a wedding of your own. Making sure you have a reliable fort collins wedding dj is one way to ensure that the entertainment is up to scratch.

Let’s start close to home. In Australia, some couples opt for the Unity Bowl. Each member of the bride and groom’s families are given a coloured stone which is unique to them. During the ceremony they each place the stone in a bowl which is then displayed at the couple’s home, symbolising how the families have coloured the couple’s life, and to remind the newlyweds of their families.

Some other traditions include:

Surprisingly, New Zealand has been missed from the research which means that we can start our own traditions. It’s more fun and creative that way!

How can we help?

TEN YEARS married to my very own love dove ❤️

First micro wedding of the year today at @rosemoun

Ever wonder what happens with your bouquet so you

KIND WORDS 💘 Oh how GOOD it feels to get beaut

I just love this photo. I remember the moment well

They said - meet us at Orton Bradley Park, and I s

Two of the sweetest love doves in town 💘 E + F

We had THE BEST time eloping away with N + M yeste

Just checking that he's OK to pass over his parent

LOVE NOTE 💘 How beautiful to receive this messa

Children and animals. They say never work with eit

We have a winner!! 💘 As I said earlier today, w

They said - meet us at Millbrook Reserve and we sa

We're blown away by the number of you who are keen

Theme by Anders Noren — Up ↑