So, you’d like to know why I do what I do? Great question!

Have you ever seen the movie The Wedding Singer? That used to be me. The singing bit, rather than the ‘meeting waitresses at weddings’ or having an awesome mullet part of the movie… I digress…

So, once I’d sung most of my friends up the aisle (there are still a few who still need me…), and performed one of their favourite songs during the signing-of-the-register, it was time to hang up the microphone – which was actually about the time I started working and travelling as a journalist.

A couple of years later, in 2009, I was working in London as a journo, and my sister excitedly called to tell me she was getting married, and wanted me to be their celebrant!

Their celebrant?! I honestly thought I’d be her bridesmaid, like I was at her first wedding! (as well as the wedding singer, of course…) But apparently it’s bad luck to have the same bridesmaid in their second wedding. I still need to google that… Off topic again…

Anyway, I half-heartedly looked into it, because I knew she wanted to get married at the ChristChurch Cathedral in the Square, and I certainly wasn’t an Anglican minister, and only the ordained can surely officiate in such a sacred space. All I could offer the church was my special gift of being a former wedding singer!

However, the more I looked into it, the more I wanted to know about becoming a celebrant. What I found out was, at the time, there was a cap on the number of celebrants in each region. It wasn’t until the marriage equality bill was passed into law (The Marriage (Definition of Marriage) Amendment Act 2013), which meant that same-sex couples could legally marry, was there a need for more celebrants, because there were more people to marry!

So, since January 2017, I’ve been hitching couples all over Canterbury, and I blimmin LOVE MY JOB!

As for my sister’s wedding? Thanks for asking… I sang her up the aisle! Nick Cave’s Into My Arms, in the incredibly beautiful ChristChurch Cathedral. They were one of the lucky ones to be married in the cathedral not long before the devastating February 2011 Canterbury Earthquakes – which completely destroyed Christchurch’s most famous landmark. I’ll never forget that beautiful wedding and that truly incredible building. 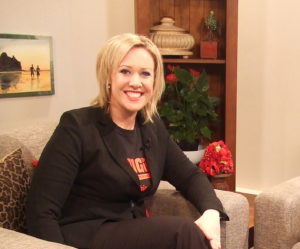 On set on Canterbury Life, CTV.

If you’re still there and you’re wanting to know more, then you may need a cup of tea and a lie down after this…

I started my career in broadcasting, straight out of high school, at Christchurch television station CTV, where I worked for two years as a junior reporter and presenter. I took a break from these roles when I was chosen to travel overseas for several months as New Zealand’s World Vision Youth Ambassador.

When I returned to NZ, I worked part-time at CTV and part-time as a drama tutor at the Christchurch Drama Centre for another two years, before undertaking a degree in English and Theatre at the University of Canterbury.

While at uni, I worked part-time in promotions at The Radio Network, and once I’d completed my degree worked full-time as the network’s promotions co-ordinator, producing the Saturday morning sports programme on Newstalk ZB, and voicing radio ads. 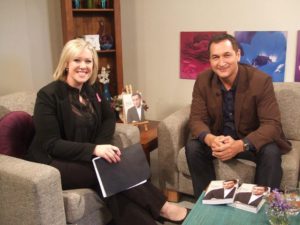 After three years in this role, I successfully applied for the post-grad journalism course at the University of Canterbury. As soon as I was qualified, I worked as news editor and journalist at Newstalk ZB, Greymouth, before moving to Auckland to work as a reporter at Radio New Zealand.

It was while I was working in Auckland that I was awarded the Robert Bell Traveling Research Scholarship from the University of Canterbury, when I moved to London to study the Digitalisation of Radio – Lessons for New Zealand. I worked as a freelance journalist, as, during the recession, it was the only way to get my foot in the door at UK media organisations – working for ITN, The Daily Telegraph, NZ Inspired magazine, TVNZ (when the All Blacks were in town), and as a travel writer for the Herald on Sunday.

When I arrived back in New Zealand at the end of 2009 I, once again, established myself as a freelance journalist as it was a great way to work with all the different types of media I enjoyed. 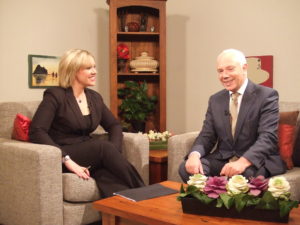 I voiced local and national commercials at Tandem Studios, created and hosted an online video series for them (Fresh Ideas), edited a website for Parliament, and worked as their social media editor; wrote theatre reviews, creative arts pieces and technology articles for The Press; freelanced for the Herald on Sunday; was a journalist, producer and fill-in news editor for Newstalk ZB; voiced commercials for TRN and CTV, and a documentary for Paua Productions.

Finding myself too busy as a freelancer, I applied for a magazine editor role at a local lifestyle magazine. The day I signed my contract with Mainland Press was the day of the February 22, 2011, earthquake. With most of my freelance work closed inside the city’s cordons, Mainland took me on earlier than planned and together we started the Rise Up Christchurch Facebook page – introducing people and communities who needed help to the scores of people willing to lend a hand. 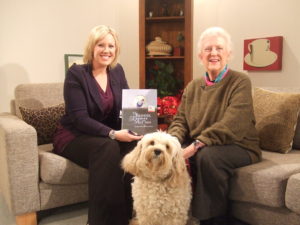 With Margaret Mahy and her dog Honey.

While editing CC magazine (now Style magazine) I was also asked to host Canterbury Life (formerly City Life) on CTV – a daily, one-hour television show which started soon after the February earthquakes, as CTV had moved into the Mainland Press building. It was created as a programme based around the Christchurch rebuild, interviewing all the decision makers, people affected by the quake, and others needing to get information across to the public. After about a year it turned into a magazine-style show, and I hosted this programme for three years before taking maternity leave. 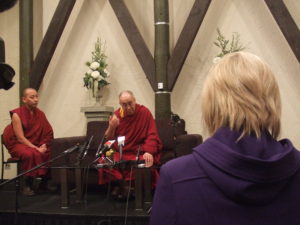 Interviewing the Dalai Lama for CTV.

I loved working in local television, and the very special guests I had on the show. Because of my role at CTV, I was often invited to host events. Including being the MC at an event for Prime Minister John Key – for the announcement of the Margaret Mahy Playground; hosted a live television discussion between CERA’s Roger Sutton, EQC, and several heads of insurance companies; made a presentation to ‘The Mad Butcher’ Sir Peter Leitch from the people of Christchurch at a large event at the CBS Canterbury Arena; hosted television segments with Mike McRoberts in a live telethon for Christchurch – Rise Up; was invited to speak at a women’s event hosted by Hon Nicky Wagner; and MC’d various events for other notable organisations.

It was during this time that Mainland purchased the national title Weekend Gardener magazine (now Kiwi Gardener), and I was the proud managing editor of this publication for three years, leaving only to take time out to have my little boy. 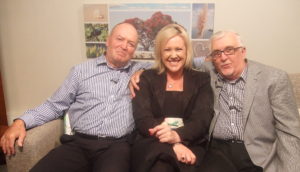 Chatting to Sir Graham Henry and Sir Mad Butcher about their love of kayaking, and other such yarns.

Wow, I’m really proud of you for making it to the end of this essay!

Nowadays, I love working as a marriage celebrant in my community, hosting Canterbury Bride of the Year, and am the editor of popular wedding magazine Canterbury Bride. Absolutely perfect combination, I’d say!

You’ll also find me recording ads in my voicebooth, trying super hard to teach myself the piano, watching my son play cricket and ensuring my Shih Tzu August has stopped at every tree in the neighbourhood.

Now – time for that cup of tea!

Theme by Anders Noren — Up ↑